Our popular summer course for senior students is held at Lady Margaret Hall (LMH), one of Oxford University’s colleges. LMH is a 15 minute walk to the centre and just a 5 minute walk from trendy North Parade, where you can find a number of cafes and restaurants.

“Lady Margaret Hall admitted its first seven students in October 1879. They pioneered women’s higher education in Oxford, entering a world of learning that had for centuries been a male monopoly. When the College celebrated its centenary [in 1979], the foundation seven had increased to four hundred, including postgraduate as well as undergraduate students.”

Today, LMH is one of the most well-respected colleges in the Oxford University system. It also has one of the most beautiful campuses of all the Oxford colleges, being situated in the northern part of the city surrounded by the University Parks, the River Cherwell, and nature areas. In February 2020 Malala, an LMH student, met activist Greta Thunberg there.

During the academic year as needed, we often hire the Gladstone and Morris rooms at the Oxford Union, conveniently located just opposite CIE in St Michael’s Street.

These rooms can be used for small or large groups and offer students an opportunity to experience the tradition of this Oxford institution. The Union has played host to a huge variety of internationally-renowned guest speakers over the nearly 200 years of its existence:

According to the Union’s website:
“To name a few, Archbishop Desmond Tutu, Mother Teresa, the Dalai Lama and even Kermit the Frog have all found the time to come and speak at the Oxford Union. Every term, every year, the Union has a tremendous range of high-profile speakers unlike anywhere else in Britain.”

We regularly use a number of rooms at the Wesley Memorial Methodist Church. These premises are close to CIE – situated just one minute away from Bocardo House. The church offers both larger rooms, which are suitable for testing in the summer, certificate ceremonies and junior classes, as well as smaller rooms used for classes during busy periods throughout the academic year.

According to the Church’s website:
“Our location, which is in the very heart of Oxford, has a very prominent frontage on New Inn Hall Street, right next to St Peter’s college. We are very easily accessible and are an ideal venue for all types of meetings.” 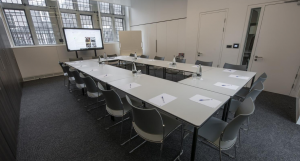